Chickens-New Beginnings at The Unprocessed Home 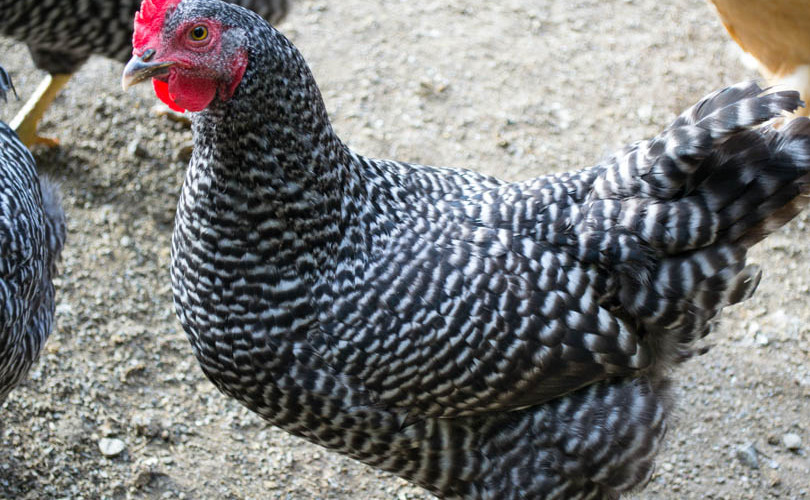 Yes it’s a happening place here at The Unprocessed Home lately. New beginnings happening everywhere. We have actually been raising these sweet birds for the past four months, but this is their first debut on the blog, and now the beginning of a new segment, called The Hen House. I will be giving you chicken updates and hopefully some helpful hints. The past four months have seemed to go on forever, waiting for these birds to lay their first egg. They are on a roll now and hope they keep it up.  So far the eggs are eaten almost as quickly as they are laid. 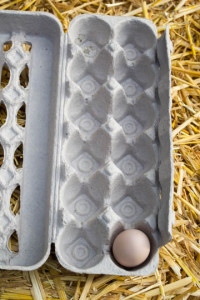 Raising chickens has been a desire of mine for a long time, I was raised in the city, but I’m a country girl at heart.  We have lived in the country for 12 years, why it took us so long to get chickens I’m not sure.  We have been living on five acres for the past 12 years and that’s about to change too, but more on that later. Beginning to raise chickens has turned out to be a lot more work than we all figured on. Being a bunch of rookies has had its downside but we have learned a lot and that will help prepare us for the bigger and better things to come. 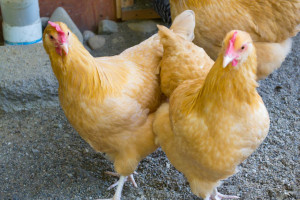 We built a coop from scratch, with a lot of help from other chicken lovers on Pinterest and those over on Backyard chickens. Not sure I would do it without some more finite plans next time, but live and learn, for the most part our coop is working fine, as is the run.  We just need to go through and eliminate the roosters this week, hopefully. My husband did a wonderful job of building a chicken feeder for the gang and also a watering system connected to the rain gutter, which around the Pacific Northwest never goes dry. 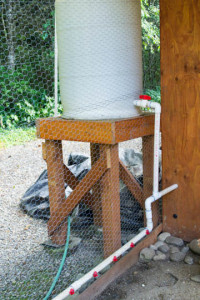 Building the coop and run was history in the making itself. We learned a lot and in our next coop won’t make the same mistakes. But live and learn right? I plan to write a post on some of the highlights and pitfalls of building our coop in the future to share with you.

The two breeds of chickens that we have are Buff Orpington and Barred Rock, both dual purpose birds. We have had them since they were two weeks old and as of the first week of July 2014 they turned 20 weeks old and began laying eggs.  How exciting was that to find our first egg in the nesting boxes(buckets). In the first five days of laying they provided us with 10 eggs, one of which was obviously bigger than the rest due to it having a double yolk.  We helped them learn the proper place to lay their eggs by placing a golf ball inside their nesting boxes. A few of them still haven’t figured it out and we find them in some of the corners, but hopefully they will get the hang of it. We haven’t had any trouble consuming the eggs, between Greek Egg Muffins and sunny side up eggs over greens, drizzled with balsamic, they get eaten rather quickly. You can plan on seeing many more recipes that have eggs as the main ingredient in the future. 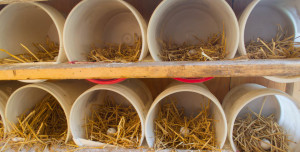 We have chosen to raise our chickens organically, making sure they are happy, not cooped up, except at night when we put them in the coop for safety. We feed them Scratch and Peck feed, which is organic, non GMO and soy free. They get a large serving of barley fodder,every morning, which I grow, and fresh greens like kale, and chard from our garden, and any other herb or green I feel like sharing, they are becoming a tad bit spoiled.  As of right now our chickens have plenty of room to roam outside, even though it’s in a chicken run, but in the near future they will become free range chickens. So welcome to our hen-house and can’t wait to share with you about our chicken happenings along the way. 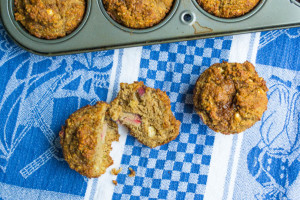 Rhubarb Banana Muffins, are just the ticket for a road trip. Rhubarb season is just about over but I think we have time for another...
Copyright 2013 The Unprocessed Home
Back to top