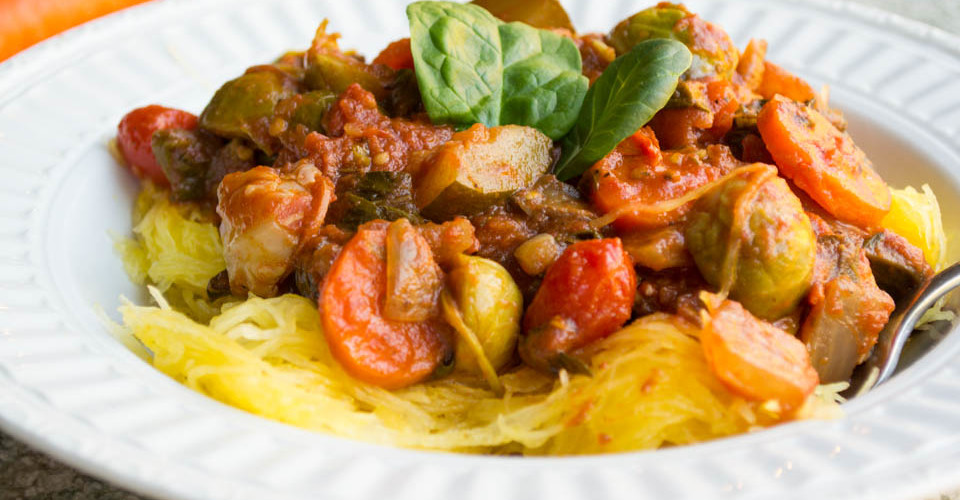 Chunky Vegetable Spaghetti Sauce has a story behind it. Once upon a time there was three pounds of Roma tomatoes and 1/2 pound of mushrooms that had been rescued from the 50% off shelf at the store, they needed to be cooked and made into something sumptuous. Enter one zucchini and a carrot, surrounded by a couple dozen Brussels sprouts, that were just hoping to be part of the party. Basil, oregano, thyme, parsley were hanging out too, knowing they could contribute to the help the mouth-watering dish come together. Spinach and chard weren’t about to be left behind, so they jumped in too,  and everything sat bubbling upon a stove. 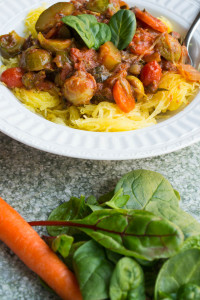 That wasn’t the end of the story, as there was a spaghetti squash that was ready to be put in a water bath and be baked in the oven, sprinkled with salt and pepper, and drizzled with olive oil. So the sauce continued to simmer and bubble and the spaghetti squash baked and became ready to be adorned with the Chunky Vegetable Spaghetti Sauce. A combination of spices, vegetables and some tender moist spaghetti squash was about to become a spectacular dish and a meal in itself. 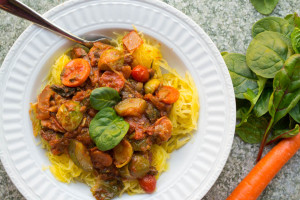 Seriously this is an amazing way to have a pasta dinner without the pasta. Gluten free, grain free and vegan, so much flavor and plant based. I believe it even tastes better than regular or gluten free pasta noodles most will choose to use with spaghetti sauce. Buy a spaghetti squash and give it a try.

Keep your vegetables chunky when you chop them, don't dice them.

February in the Kitchen Tips

I tried to combine Brussels sprouts with tomato sauce for the first time tonight thanks to this post and I’m glad I did. Thanks for the inspiration!

Wow, Thanks Ines, so glad you got adventurous and tried it and liked it. 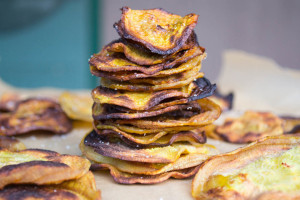 Balsamic Golden Beet Chips, a little bit of sweet and savory. Golden beets have a fabulous down to earth flavor but with...
Copyright 2013 The Unprocessed Home
Back to top